The Headquarters office of the NCNGA has an open intern position available this semester.

This is a paid internship with flexible hours and is designed to be in-person. We are looking for someone to: support publication of bi-monthly magazine, work to increase social media presence and web traffic, complete special projects as assigned, assist in preparation of membership reports, manage and update database of members, and assist in mailing operations.

To apply please submit resume and a short response (250 words or less) to the following question:

What do you hope to gain from this experience and what skills would you bring to this position?

“Brace for landing” echoed through the cabin of a C-17 Globemaster III aircraft descending into Germany Dec. 25 as members of the 156th Airlift Squadron and Brooke Army Medical Center rushed to the aid of a baby suffering a low heart rate and oxygen saturation.

“We were originally tasked for this mission because the NCANG has the aeromedical evacuation channel right now, where we send crews out to do medical evacuation missions, and our channel runs about four months,” said U.S. Air Force pilot Capt. Barry Plemmons, 156th Airlift Squadron, North Carolina Air National Guard.

The channel rotates among units across the globe providing humanitarian missions by Air Force and affiliated military services.

“The particulars of this mission are rare with a neonatal patient. With that said though, the patient movement is something close to my heart and a favorite mission we do,” Plemmons said. “What we do is take someone that is physically or mentally wounded from a place they shouldn’t be to a better standard of care and get them the help and treatment they need.”

For this mission, North Carolina Air National Guard members worked with medical teams from across the world, including Andrews, Ramstein, Dover and Scott Air Force Base, and Brooke Army Medical Center, Joint Base San Antonio, Texas.

“We picked up the baby Christmas Day in Kuwait and delivered her to Germany in the same day,” said Tech. Sgt. Alejandro Armendariz, 145th Aircraft Maintenance Squadron, the crew chief.

The mission coincided with severe cold weather, snow and ice.

“The day we left, it was the big storm that came through, and at the time of deicing, it was minus 5 degrees with windchill,” said Armendariz. “I was outside for nearly four hours deicing and refueling the aircraft. There was a point I couldn’t feel my fingers or cheeks, but it was well worth it to put my body through that to get the baby to a hospital.”

The Tarheel Minuteman Foundation is holding the annual Scholarship Fund Golf Tournament on April 24, 2023! This event will take place at the beautiful Lakes Course at Carolina Trace Country Club. All proceeds will assist in providing scholarships to members of the North Carolina National Guard and their families.

Online registration for players and sponsorships will be open next Thursday, January 12th.

The Final Chapter for the 171st Engineer Company DVIDS

The National Guard fell about 9,000 troops short of its goal in 2022. Some states are improving their outreach and incentive plans to try to counter that trend.
Walking into the armory in St. Pauls, North Carolina, felt like walking into a reunion.

The armory, which belongs to the North Carolina National Guard (NCNG), is the former home of the 171st Engineer Company.

I walked past former and current NCNG Soldiers hugging, laughing, and telling stories as I entered the building on January 7, 2023.

I was in awe at the number of people in civilian clothes; there were more people who no longer served than uniformed Soldiers in attendance.

Waiting for the ceremony to start, I saw a young lieutenant holding a ceremonial bugle, a horn instrument fitted with a speaker to play taps when a musician is unavailable. He was the final executive officer for the 171st. He would be pushing the button to play the music during the ceremony to honor the unit’s memory and those who had died in service.

U.S. Army 1st Lt. Justin Duncan was part of the unit for less than a year before being transferred as part of the Engineer Company’s closure.

“It’s a mixture of feelings,” Duncan said. “The initial feeling is ‘why is this happening’, and trying to understand the organizational reason for the unit closing down.”

Later during the ceremony, Capt. Micheal Haugh, the 171st’s final commanding officer, said that the unit closing down symbolized that the NCNG was responding to current threats and moving towards a new force structure.

The 171st Soldiers were not strangers to the idea of restructuring to meet the needs of the military; the unit traces its lineage back to 1949 when it began as an anti-aircraft artillery battalion.

From there, the unit transitioned to an armor unit before reorganizing as Charlie Company, 105th Engineer Battalion in 1996, which deployed to Iraq in 2004. In 2006, it became the 171st Engineer Company.

“You can look out at all the beards in this crowd and see how the guard has had a very diverse and unique group of Soldiers who served their community,” Duncan said. He was referencing the former Soldiers in attendance, many of whom had grown beards after leaving the military. 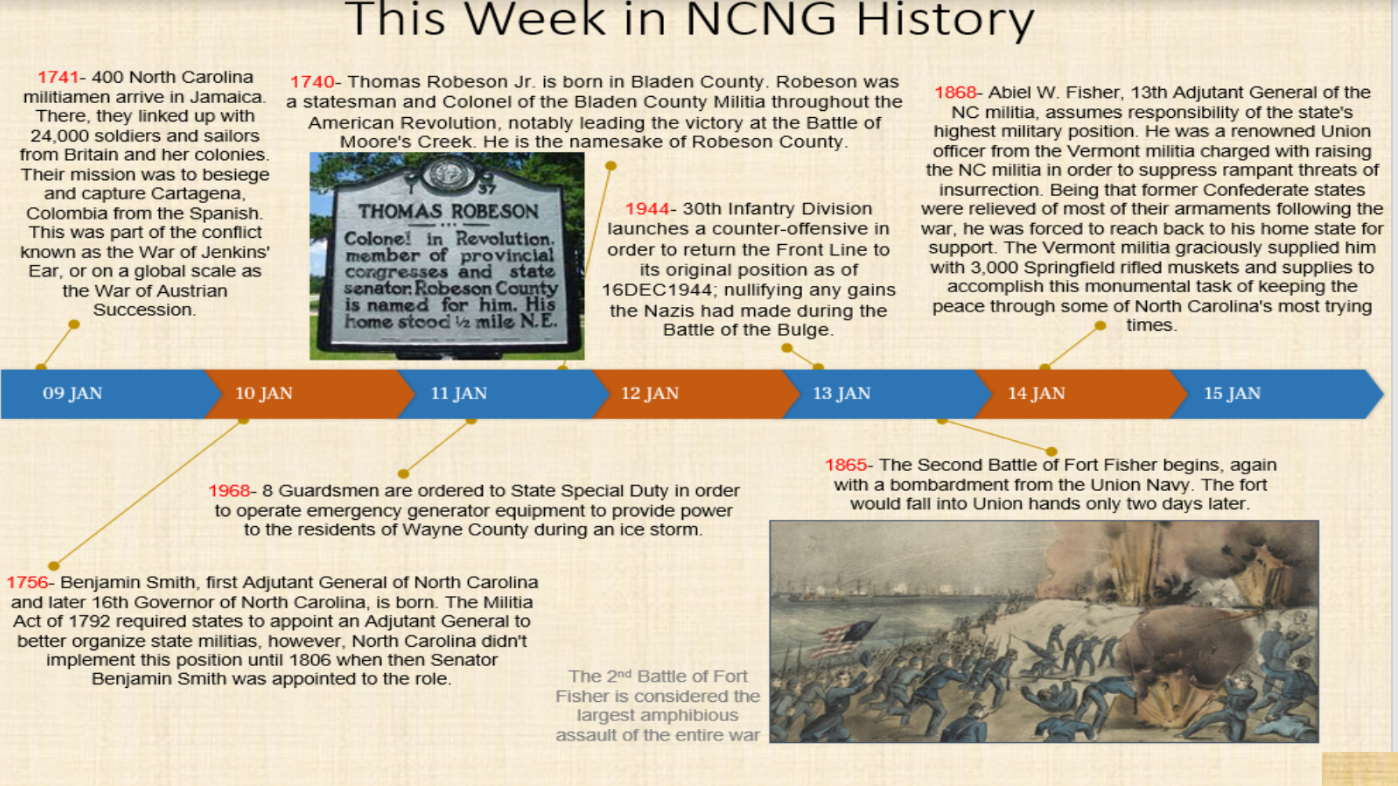 1942
San Francisco, CA – “Combat Team X” sails for Singapore aboard the transport steamer President Coolidge. It is made up of ten North American 0-47 aircraft with crews drawn from several mobilized Guard observation squadrons. With the impending fall of Singapore to the Japanese the Team was diverted to Australia where for a brief period it flew antisubmarine patrols. Each plane carried two depth charges though they spotted no enemy boats. By summer the Team was broken up and its men were reassigned to other Army Air Corps units in theater.